A short history of witch fever

Medieval folk had long suspected that the Devil was carrying out his evil work on earth with the help of his minions. In 1484, Pope Innocent VIII declared this to be the truth in his Papal Bull, which had the result of creating witch-hunts across Europe which lasted for nearly two hundred years.

The centre of the witch hunts were the German-speaking lands of the Continent, and Scotland, but in 1645, England (and most notably Essex) was in the grip of witch fever. Between 1560 and 1680 in Essex alone, 317 women and 23 men were tried for witchcraft, and over 100 were hanged.

Religious tensions resulted in the introduction of serious penalties for witchcraft. Henry VIII’s Act of 1542 – the first to define witchcraft as a felony; a crime punishable by death and the forfeiture of the convicted felon’s goods and chattels. Additional laws in 1563 and 1604, making the death penalty liable for ‘invoking evil spirits and using witchcraft, charms or sorcery whereby any person shall happen to be killed or destroyed’.

King James (VI of Scotland and I of England) was a keen believer in witchery – and writing the book Daemonologie, took part in the interrogation of a suspected witch, Agnes Sampson of Keith, Scotland. The persecutions were aided by difficult times for ordinary people in the early seventeenth-century – religious strife between Catholics and Protestants, political arguments leading up to the Civil War, rising inflation meaning higher food prices, and a huge increase in the gap between rich and poor. 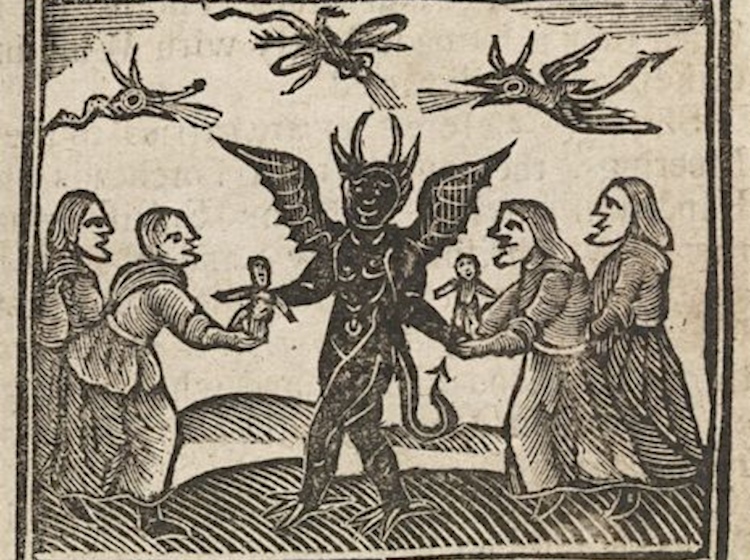 Image depicting the Agnes Sampson trial in 1591. It shows The Devil giving witches magic dolls.
An image of a witch and her familiar spirits taken from a publication that dealt with the witch trials of women in Windsor in 1579

Many people turned to spiritual and alternative guidance in these tough times, but such ideas were frowned upon by religious leaders, as well as the Kings and Queens of the day. Thus, hundreds of trials of common-folk who, for their beliefs and practices in herbal remedies and potions, foretelling of weather, harvests and health of livestock, were taken before the courts and trialled for being sorcerers and practising in demonic ways. Many murders were also associated with witchcraft, taking the form of poisoning, or malicious acts using familiars against neighbours, village-folk, and even their own kin.

It wasn’t until the Witchcraft Act of 1735 that a complete reversal in attitudes was marked. Many influential figures believed it to be an impossible crime, and it was replaced by penalties for the pretence of witchcraft; punishment being the same as for vagrants and con artists, and subject to fines and imprisonment.

The Secret History of Southend-on-Sea

The A-Z of Curious Essex

The Story of Colchester Zoo

Not a Guide to: Southend on Sea

The Colchester Book of Days