The Post Office dates way back to 1660 when it was established by Charles II. Under the guise of the General Post Office (GPO), it soon grew as an important organisation integral within the infrastructure of England during the seventeenth century.

Just one year after it was formed, the postage date stamp was first used and the inaugural Postmaster, Henry Bishop – also the inventor of the first postmark used on mail, was appointed tasked with overseeing the GPO. As both the state system provider and telecommunications carrier, the GPO expanded across the British Empire from having an initial jurisdiction across just England and Wales; then for the whole of Great Britain.

It was over 100 years later when the next significant milestone in the life of the GPO saw uniformed post men take to the street for the first time (1793).

A key moment in terms of the developing infrastructure of the postal network came in 1829 when the first purpose-built mail facility was fully operational. Located in St Martin’s Le Grand, EC2, the building designed by Sir Robert Smirke was 400ft long by 80ft deep.

The headquarters of the General Post Office in St Martins-le-Grand in the City of London, late 1820s
Clerks at work in a London post office circa 1808

The introduction of the Penny Black was responsible for the introduction of the Uniform Penny Post, a uniform postal rate which cut administrative costs and encouraged use of the postal system and adhesive postage stamps. Initially it was normal for the recipient of the post to pay the fee and they had the right to refuse to accept the item if they did not wish to pay. The charge was based on the distance the item had been carried and the number of sheets, so the GPO had to keep a separate account for each item. As a result British postal rates were high and complex. To simplify matters, Hill proposed an adhesive stamp to indicate pre-payment of postage. The Penny Black allowed letters of up to ½ ounce (14 grams) to be delivered at a flat rate of one penny, between any two places in the United Kingdom of Great Britain and Ireland irrespective of distance.

Less than 20 years later, in 1868, the first military links to the Post Office were formed as the 49th Middlesex Rifle Volunteers Corps, known as the Post Office Rifles came into being – made up of GPO employees. These initial military connections to the GPO were then to be magnified as the organisation played a pivotal role during the First World War. 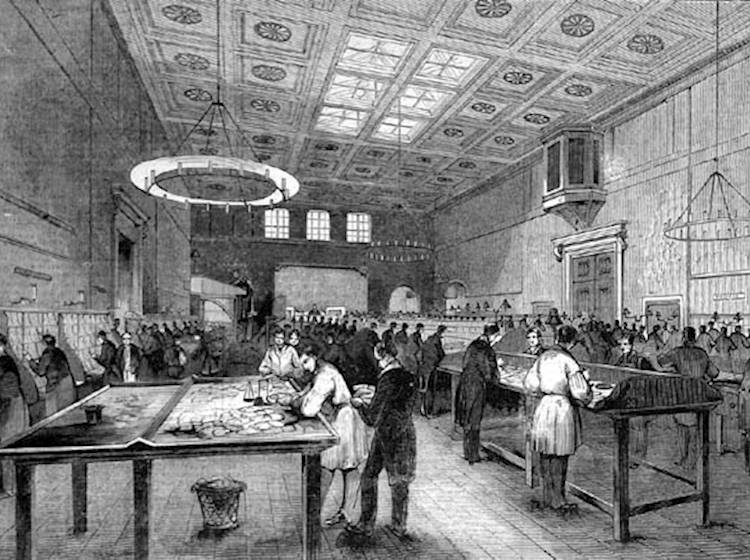 The Inland Letter Office at the General Post Office in 1845

By the outbreak of the conflict in 1914, the Post Office employed over 250,000 people and nearly a quarter of these were enlisted with the army. As well as the 12,000 men who fought with the Post Office Rifles regiment, some 35,000 women were employed in temporary positions during the Great War as the GPO played a pivotal role in maintaining communications throughout the conflict.

1969 was another poignant year for the organisation as the GPO was dissolved to become known as the Post Office for the first time. In the same year the savings bank offering of the Post Office was transferred to the treasury and re-branded to become National Savings.

Postal distribution efficiency was significantly increased by creation of post codes, introduced five years later in 1974. From there the previous telecommunications arm of the Post Office disappeared in 1981 when the British Telecommunications Corporation was formed.

The Post Office Ltd as it is known in its current form came into existence in 2001. Ten years later the Postal Services Act 2011 was significant in that it led to the Post Office Ltd becoming independent of the Royal Mail Group as of 1 April 2012.

As a newly formed mutual organisation, independence from Royal Mail enabled the Post Office to make independent strategic decisions. Network modernisation, including extended opening hours and a reduction of the Crown network by moving Crown post offices into shops, is laying the foundations for the Post Office Ltd to evolve further moving forward.