A nursing sister on the Western Front

Nurses cared for the casualties of the First World War in Europe (on the Western and Eastern Fronts and in the Eastern Mediterranean), in the Middle East (Egypt and Palestine) and in Mesopotamia, India and Africa. The British Military Nursing Service was aided by Voluntary Aid Detachments (VAD) and the numbers swelled by the arrival of trained military nurses from Canada, Australia, New Zealand & South Africa; nurses from the USA worked alongside QAIMNS (Queen Alexandra's Imperial Nursing Service) nurses in France and Flanders.

Katherine Evelyn Luard was born in 1872, the tenth of thirteen children of an Essex clergyman. After training as a nurse at the prestigious nurse-training school of King’s College Hospital, London, she offered her skills to the Army Nursing Service and served for two years in South Africa during the Second Anglo-Boer War. There she would have met many of the officers who were later to command in World War One.

On August 6 1914, two days after the British Government declared war against Germany, Kate enlisted in the QAIMNSR (Queen Alexandra’s Imperial Nursing Service Reserve). She served in France and Belgium until 1918, first on the ambulance trains and then in casualty clearing stations. She was awarded the RRC (Royal Red Cross) and Bar (a rare distinction) and was mentioned twice in despatches for gallant and distinguished service in the field.

During this time she exchanged numerous letters with her family at home. Many of those she wrote were published in two books: Diary of Nursing Sister on the Western Front 1914-1915 published anonymously in 1915; and Unknown Warriors first published in 1930 and now available in a new edition published by The History Press.

Both books offer a very personal glimpse into the hidden world of the military hospitals, casualty clearing stations and ambulance trains where patients struggled with pain and trauma and nurses fought to save lives and preserve emotional integrity. Her writing shows her as always outwardly cool and calm, willing to adapt to anything anywhere, and carrying out her duties with unfaltering composure and dedication to the men she nursed. Through her letters home she conveyed a vivid and honest portrait of war and they are also a portrait of close family affection and trust in a world of conflict.

Captain D. is a scrap better to-day, able to emerge from bromides, and talk a little. He told me that when they were holding the Hohenzollern trenches in that worst weather, when they stood waist-high in liquid mud, two of his men slipped under it when asleep and their bodies were dug out next day.

The boy with the head wound, has been peacefully dying all day; his hand closes less tightly over mine to-day, but his beautiful brown eyes look less inscrutable as he gets further from this crooked world. His total silence and absolute stillness and unconsciousness have already given him the marble statue look.

A large and festive picnic in the woods, far removed from gas gangrene and amputations. We had an Ambulance and two batmen to bring the tea in urns to my favourite spot - on a slope of the wood, above the babbling brook, literally carpeted with periwinkles, oxlips and anemones. 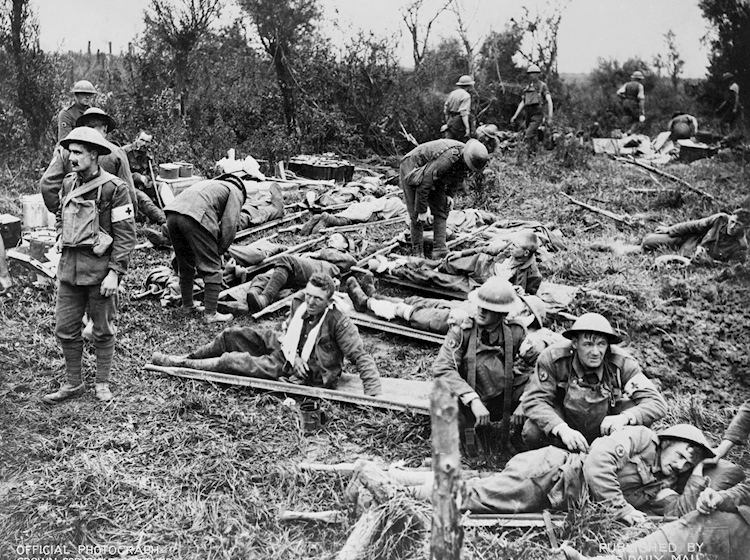