A history of British pub names

Walk down any British high street and you are sure to see a pub. The local. Nearly every British city, town or village has one. You can also be sure that, no matter the age of the building, the name of the pub draws inspiration from history. There’s a unique heritage to the pub names and signs in Britain, which depict everything from historic events, local folklore and occupations to royalty, notable characters, ancient associations and heraldry – a simple pub sign can hold the key to a town or village’s past. We take a look at the history behind the names of Britain’s much-loved pubs...

The naming pf pubs is said to stem from Roman times, when Tabernae would hang vine leaves outside as a trading sign, in order to alert passers-by that wine was sold within. However, it has been suggested that when the Romans invaded Britain, vine leaves were in short supply, so they hung bushes up outside instead in order to mark out the inns. It is said that this gave rise to the many pubs which are now called The Bush, The Hollybush or The Bull & Bush.

The first proper public houses did not appear until centuries later, when medieval publicans would hang distinctive objects outside their inn in order to distinguish them from the surrounding properties. Names such as The Plough, the Copper Kettle, The Boot or objects which were coloured, such as the Blue Door, were commonplace. Other inns took a different approach. Religious houses during the time of Richard the Lionheart ran the earliest inns catering for pilgrims and knights on their way to the Crusades in the Holy Land. Numerous inns acted as stopover points for the Crusades forces and pub names which can be derived from this time include The Turk’s Head, The Saracen’s Head and The Lamb and Flag (the lamb representing Christ and the flag the sign of the crusaders).

By the 12th century the naming of inns and public houses was fairly common, and with pub names came pub signs. In a time when most of the working population was illiterate, pictorial signs were used instead of lettering to advertise the inns, or the type of entertainment on offer inside. Considering that ale was their primary trade, many of the public houses opted for something to do with beer. It’s likely that names such as The Hop Pole, The Barley Mow or The Three Barrels originate from these times.

In 1393, during the reign of King Richard II, an Act was passed which made it compulsory for pubs and inns to have a sign in order to identify them as official watering holes. Many adopted The White Hart as their sign as it was the personal badge of the King – today it is the fourth most popular pub name in the UK. The Crown was also a popular choice as it was an an easy way of pledging support to the reigning monarch without having to change with the occupant of the throne. Another popular name from that time is The Rose and Crown, which celebrates the end of the War of the Roses and the uniting of the red rose of Lancaster and the white rose of York when Henry Tudor married Elizabeth of York.

Before the Reformation during King Henry VIII’s rule, many pub names took a religious theme and the religious influence on British pub names would have continued indefinitely had it not been for the Dissolution of the Monasteries. At this point, many pubs were quick to eradicate any Catholic link; The Ark became The Ship and St Peter (the guardian of the gates of heaven) became the Crossed Keys. Other publicans played it even safer by hastily adopting loyal names such as the Kings Head or Kings Arms. Names with a religious slant which survived and are still in use today often indicate that the inn is located in close proximity to a church, or was at some point in their history − examples include The Angel and The Bell.

Following the Battle of Worcester 1651 in the English Civil War, the defeated Prince Charles escaped the Roundheads and managed to flee to Boscobel House in Bishops Wood, Staffordshire to seek refuge. In order to evade Cromwell’s troops, Charles found a great oak tree a short distance from the house (now known as the Boscobel Oak) which he climbed, successfully hiding out in its branches for a day, before spending the next night cramped into a tiny priest-hole within the house.

When Charles was eventually able to escape to France, little did he know that his tree-climbing escapade would become so famous. The tale captured the public imagination and people told and retold the story of the oak tree, so much so that when he later returned as King Charles II on the Restoration in 1660, many pubs were renamed The Royal Oak in his honour. Instead of being regarded as a symbol of defeat, the Royal Oak came to represent defiance and loyalty to the kingdom. Not only that, but Charles’ birthday (29 May) was declared Royal Oak Day and the famous episode also inspired the oak-apple day celebrations. Today The Royal Oak is the third most popular pub name in Britain (after The Red Lion and The Crown). 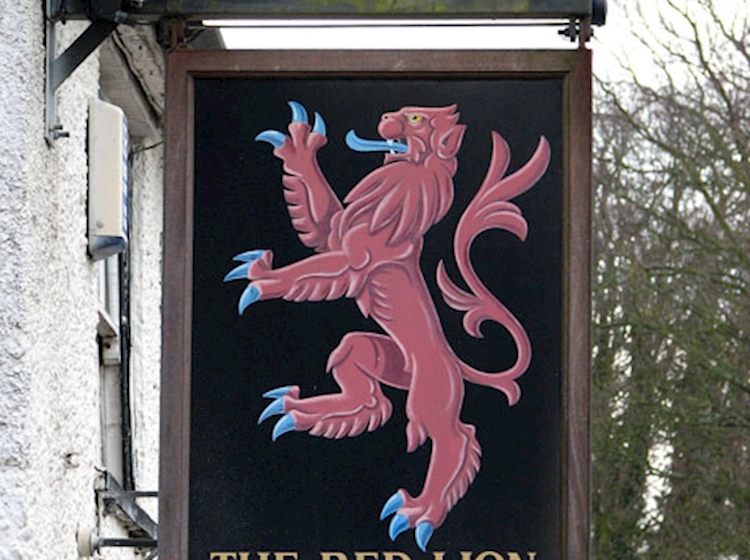 As a way of gathering custom, many public houses chose to associate themselves with the predominant trade in the area. Craftspeople moving to an area would seek out such a pub, so inns such as The Golden Fleece (for the wool trade) and the Bricklayers’, Masons’, Saddlers’, Blacksmiths’ or Carpenters’ Arms established themselves as meeting places for particular trades.

Many pub names derive from their names from hunting – near old hunting grounds there are plenty of pubs called The Greyhound, The Fox & Hounds, Dog & Duck or Hare & Hounds. The Bird in Hand is said to derive from King Henry VIII’s love of falconry and The Cock from the days when cock fighting was a popular pastime.

Nowadays more ‘modern’ sports are represented by names such as The Cricketers’ Arms or The Anglers’ Rest.

In the 18th century, as the population became more mobile, a need for coaching inns grew. Predictably pubs such as The Coach & Horses, The Wagon & Horses or The Horse & Groom became more commonplace, marking points where stagecoaches would stop. Later the advent of the canals and railways gave many towns a Navigation or a Railway or Station Inn.