500 years of the Royal College of Physicians

Established in 1518 with the granting of a royal charter by one of history’s most famous monarchs – Henry VIII – the Royal College of Physicians of London is the oldest medical royal college in England and Wales, and amongst the most ancient professional medical organisations still operating anywhere in the world. Today it continues to play a pivotal role in raising standards and shaping public health.

Back in the 1500s medical practice in England was poorly regulated. Often ‘physicians’ worked with no formal training or knowledge and it is likely that they killed as many patients as they cured. In the early 16th century leading physicians wanted power to be able to grant licences to those with proper qualifications and to punish unqualified practitioners and ‘quacks’ who engaged in malpractice.

The Apothecary by Pietro Longhi circa 1752

Led by the scholar Thomas Linacre, a small group of physicians petitioned King Henry VIII to establish a college of physicians and on 23 September 1518, the king founded a college to regulate the practice of medicine in the City of London and seven miles around the city with a royal charter. Based on the academies in Italy, the Royal College of Physicians was born.

A likely portrait of Thomas Linacre copied by William Miller, 1810 from a painting at Windsor Castle

Learn more about the college’s history using this interactive timeline, which guides readers through half a millennium of the Royal College of Physicians.

Over the years the Royal College of Physicians has adapted and developed in ways that have mirrored broader changes in society and human knowledge. From the founding of the college in 1518 by Henry VIII, through the granting of permission to perform human dissections by Elizabeth I, to the publication of the first book of approved medicines and the invention of vaccinations, it is a gripping narrative.

Charter of incorporation for the College by Henry VIII under the Great Seal, 1518 (Royal College of Physicians)

The college’s rich and varied history, which incorporates the outbreak of the plague and the ravages of the Great Fire of London, has endured the political divisions of the civil war and ferocious disputes concerning the enlightenment’s revolutionary scientific discoveries. It has played witness to the licensing of ‘madhouses’, debated the role of women in the medical profession during the Victorian era and survived the bomb damage of the Second World War – to name but a few. In the past 100 years the Royal College of Physicians has also been at the forefront of creating universal healthcare in the UK and the worldwide campaign against tobacco smoking and in 1989 appointed its first female president – Dame Margaret Turner-Warwick.

To mark its five centuries of medicine, the Royal College of Physicians is celebrating with 12 months of special exhibitions and historical events, exploring some of the perplexing questions and intriguing personalities which have shaped the organisation, medicine and our culture. From anatomical discoveries to treasures from their astonishing archives and museum collections, 2018 reveals both the Royal College of Physicians and medicine’s history in a new light.

A brand new website www.history.rcplondon.ac.uk opens up the college and its collections to the public as never before. From cures to curiosities, scientific advances to artistic masterpieces and hidden histories, the new resource makes many of the treasures of the 500-year-old college – amongst the most impressive, but little known in Britain – available online for the first time. The site includes an online gallery – which hosts more than 500 images of rare books and artefacts from the last five centuries – a timeline covering defining events and people from the college’s history in the context of the changing world of medicine, society and learning and historical articles, blogs and a guide to the extensive events programme which will be running throughout this anniversary year.

The Wilton Psalter, written circa 1250 (Royal College of Physicians)

Amongst the cornucopia of curiosities and rarities represented are art works by the likes of Sir Thomas Lawrence, Johan Joseph Zoffany and Jacob Epstein as well as anatomical specimens, medical instruments, personal correspondence and ceremonial paraphernalia. Featured items range from The Wilton Psalter, a handwritten copy of the Book of Psalms dating from around 1250, to the earliest known copy of a guide to dancing published in Paris at the end of the 15th century and Andres Vesalius’ ground-breaking illustrated anatomy of 1543. Archive images of the Royal College of Physicians’ homes, designed by architects including Robert Hooke, Christopher Wren, Robert Smirke and Sir Denys Lasdun also feature and visitors can discover how doctors and patients used astrology, ‘modesty dolls’ and phrenology to determine treatments; chart the development of the stethoscope; see a set of tools likely used to operate on the wounded from the English Civil War or read the papers of Dr William Harvey, the man who discovered circulation of the blood. 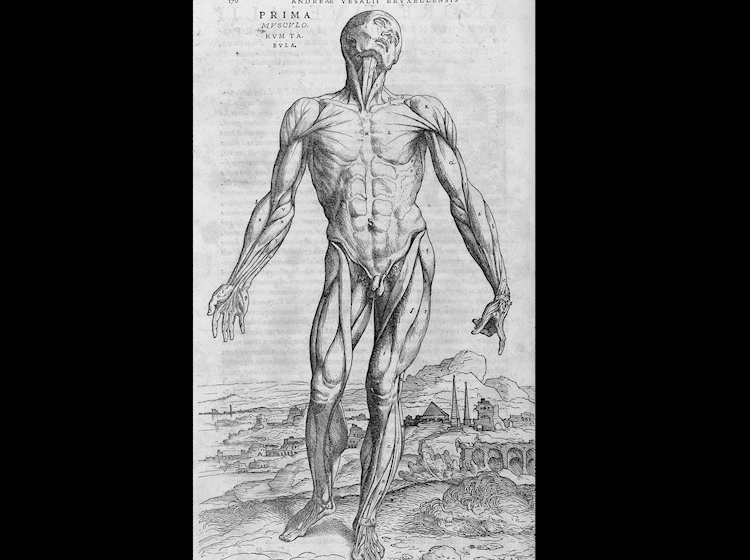 Starting back in January 2018 and continuing throughout the year, Curator’s Curiosities is an anniversary heritage trial which brings a new focus to half a millennium of medicine, history and ideas. In a brand new specially curated heritage trail, visitors journey through the Grade I listed Royal College of Physicians discovering highlights from the college’s astounding collections and history uncovering collections reflecting the curious intersection of medicine, art and society. Each month a changing Curator’s Curiosities display casts a spotlight on a particular object from the vaults; a collection which includes over 6,000 paintings, sculptures and prints, 20,000 rare and historic books and a significant selection of medical artefacts.

Among the artefacts introduced by the college’s librarians, archivists and curators are the original founding documents bearing King Henry VIII’s great seal from 1518; an antimony cup from the 17th century used to ‘poison patients back to health’; a centuries-old forged medical qualification and a remarkable 1930s machine for collapsing tuberculosis sufferers’ lungs.

This vexed question: 500 years of women in medicine

From 19 September 2018 and into 2019, a major new exhibition This vexed question: 500 years of women in medicine explores the complex history of women as medical practitioners and confounds prevailing notions of female participation in the medical professions and wider society.

Taking its title from the comments of a progressive Victorian male medical student who lamented the physical violence with which some of his peers reacted to the ‘vexed question’ of women training to be doctors, the exhibition explores the intriguing stories, and battles of famous and forgotten female figures from more than half a millennium of medical practice.

Using a range of rare and personal objects, from medieval records to medical equipment, letters to portraits, alongside items never publicly seen before, the displays lead the visitor in search of Britain’s earliest female clinicians. Highlights include:

Who were Britain’s first female doctors?

Female apothecaries, herbalists, writers of medicinal recipes, midwives and doctors have all worked within a male-dominated world for many centuries. Yet their roles have often purposely been obscured and have frequently provoked fierce debate.

Most people’s minds turn to 19th century pioneers such as Elizabeth Blackwell and Elizabeth Garrett Anderson when thinking of the first female doctors and whilst it’s undoubtedly true that these Victorian trailblazers were amongst the first women to be allowed to train at medical school and take university medical qualifications, this masks a much longer and richer history stretching back through time.

The earliest known female doctors come from 13th century Leominster in Herefordshire. A charter dating from sometime after the year 1234, reproduced from originals at the British Library, indicates the existence of a set of medical siblings: one brother and his two sisters, the female doctors Solicitia and Matilda. Unfortunately no further information remains about these individuals.

Early evidence of the systematic exclusion of women from the medical profession comes in an act of parliament from 1511, reproduced courtesy of the Parliamentary Archives. It features women amongst the ‘great multitude of ignorant persons’ who illegally carried out ‘the Science and Cunning of Physick and Surgery’.

A female apothecary compounding a remedy for a patron

Moving forward more than 300 years, Elizabethan England was home to Alice Leevers, who was put on trial and punished on several occasions for illegally practising medicine. Though other women were imprisoned for ‘impersonating’ doctors, Alice was finally allowed to go about her business peace following intervention from Lord Chamberlain in 1586, which raises the possibility that Queen Elizabeth I – a patron of the medical profession herself – knew of the case.

Others, however, were not so lucky. Whilst a blind eye may have been turned to Alice Leever’s activities, on 16 February 1631 Susan Lyon appeared before a panel at the then College of Physicians and was forbidden for producing or selling any more medicines. Her crime, according to the official records known as annals, was not just that she made medicines, but that she sold them on to an unlicensed Dutch physician. In the 17th century the number of licensed physicians was relatively small and other professionals, particularly apothecaries, provided care to a large proportion of the population. In Susan’s case the Worshipful Society of Apothecaries intervened and compelled Susan, who had learnt her skills from her deceased husband, to train her second husband as an apothecary in order to be allowed to continue in business.

A legal bond on display dated 24 February 1709 records that Elizabeth Pratt agreed to immediately cease all medical practice and take down a sign for her services from her door. In this case, however, the authorities had good cause: Elizabeth had administered ‘crude mercury’ to Mary Morecock for a sore throat, resulting in the patient’s death.

Approval from the church

The archives of the Archbishop of Canterbury yields letters of recommendation for Elizabeth Moore of Market Harborough in Leicestershire. Outside the City of London it was bishops, rather than the College of Physicians, who issued licences to practise medicine, as happened for Elizabeth on 17 January 1690. Testimonials from the time describe her as ‘a person of great skills and experience in the practice of physick, very safe in her administrations & very successful’. Between 1613 and 1696 the Archbishop of Canterbury licensed no fewer than 12 medical women, making them some of the earliest sanctioned female doctors.

Born a little under a century later in 1789, James Barry became a doctor after an oral examination in front of a panel of experts. An enigmatic image depicts Dr James Barry, who rose to one of the British Army’s most senior medical officers. However, this seemingly conventional story becomes more complicated and interesting when following Barry’s death it was discovered that he had actually been born Margaret Anne Bulkley and only began living as a man in teenage years in order to be allowed to secure a career in medicine. The discovery of Barry’s sex assigned at birth caused a scandal, and raises questions as to how many others might have taken a similar route into medicine in the past.

The voices of medical women from the last 100 years also appear as audio testimonies. Participants describe their experiences of the 20th century and contemporary medicine, with accounts making clear that although the amount and seniority of women in the profession has increased dramatically, debates on the ‘proper place’ of women in medicine still persist in certain circles.

Marking milestones including Vote100, NHS70 and the centenary of the end of the First World War, This vexed question opens the debate about what it means, and has meant, to be a woman and a doctor. It opens at the Royal College of Physicians on 19 September 2018 and runs until 19 January 2019. The exhibition and permanent collection will open Monday to Friday 9am to 5pm. Admission is free.

Additional information about the Royal College of Physicians, its 500th anniversary and the wider programme of events can be found on the dedicated new website: https://history.rcplondon.ac.uk/

Wards in the Sky

Women in the War Zone

If Wards Could Talk