A few minutes before 07:00am on Saturday 30 September 1967 and a 24-year old DJ named Tony was poised ready to place the needle onto the record ‘Flowers in the Rain’ by The Move. That young DJ was Tony Blackburn, and this marked the arrival of BBC Radio 1.

The government had recently outlawed the unregulated offshore pirate radio stations, such as Radio Caroline and Radio London, using the Marine Broadcasting Offences Act and simultaneously, the BBC – which lacked a dedicated popular music station – announced plans to ‘kill off’ its Light Programme (which broadcast a mix of mainstream light entertainment and music), Home Service (news, drama, talks and informational programmes) and Third Programme (arts and culture programmes). The future would be ‘Radio by numbers’ – Radio 1 and Radio 2 would succeed the Light Programme, Radio 3 would replace the Third Programme and Radio 4 would replace the Home Service.

Radio 1, the ‘swinging new radio service’ as the Radio Times billed it, was launched to meet the demand for music generated by the pirate radio stations, and took much of its style from them, even employing several of the ex-pirate disc jockeys, including Tony Blackburn, Ed ‘Stewpot’ Stewart, Kenny Everett, John Peel and Johnnie Walker. It launched at 07:00 a.m. 30 September 1967 and Tony Blackburn was the first DJ on air, launching the station with his new programme Daily Disc Delivery with Robin Scott, then Controller of Radio 1, standing over him. The first record played on Radio 1 was Flowers in the Rain by The Move, followed by Massachusetts by the Bee Gees. 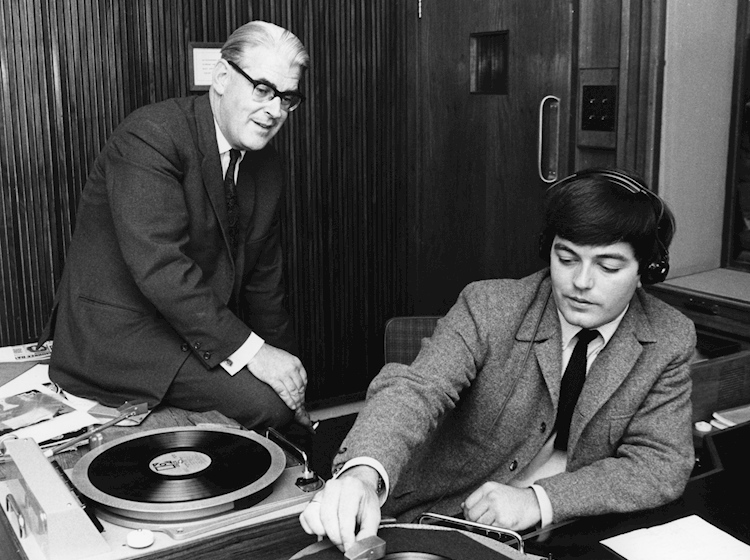 Radio 1 was instantly popular, doubling the Light Programme audience within the first month of launch and going on to command more than 24 million weekly listeners at its peak. This was despite despite it only being a fixture on medium wave for its first 21 years. It was allocated space of Radio 2’s FM frequency for a few hours a week and on Bank Holidays, but did not get a stereo transmission in its own right until 1988.

To mark Radio 1’s 50th birthday we have put together a Spotify playlist featuring one of the best-selling songs from each year Radio 1 has been broadcasting. Listen below!