12 little-known facts about Catherine of Aragon

What do you really know about Henry VIII’s first wife, Catherine of Aragon? Here are 12 facts which profile this tenacious, single-minded and principled Tudor queen.

Catherine was betrothed to Henry VII’s infant son Arthur, at the age of three. They first met on 4 November 1501 and married 10 days later at Old St Paul’s Cathedral – both were 15 years old.

Arthur and Catherine lived at Ludlow castle where she became Princess of Wales. Just six months later Arthur was taken ill with sweating sickness and died.

She was subsequently promised to Arthur’s younger brother Henry VIII, five years her junior, partly to avoid having to return her 200,000 ducat dowry. They married in a private ceremony in the church of the Observant Friars outside Greenwich Palace in 1509. She was 23 years old and the king was a few days away from his 18th birthday.

Her marriage to Henry had depended on Pope Julius II granting a special dispensation because canon law forbade a man to marry his brother’s widow. Catherine testified that her marriage to Arthur was never consummated and as such was not valid.

In 1507, she held the position of ambassador for the Spanish Court in England, becoming the first female ambassador in European history.

Catherine (Katherine) with her pet monkey

Catherine became pregnant six times providing two sons and a daughter. The other children died at birth. Both sons were named Henry Duke of Cornwall, however neither survived more than a few months. Her surviving daughter later became Mary I of England, Elizabeth I’s half sister.

Henry appointed Catherine Regent, or Governor, of England while he went to France on a military campaign. King James IV of Scotland declared war on England and when the Scots invaded she ordered Thomas Lovell to raise an army in the midland counties. Catherine rode north in full armour to address the troops, despite being heavily pregnant at the time. After the English victory at the Battle of Flodden, she sent Henry a piece of the bloodied coat of King James who had died in the battle.

She inherited her tenacity from her mother, Queen Isabella I of Castile. Isabella had reformed Spain with her husband King Ferdinand II and supported and financed Christopher Columbus’ 1492 voyage to the New World.

Catherine’s badge depicts a pomegranate, an ancient symbol for fertility and regeneration and in the Christian church is a sign of Christ’s resurrection. It would have been seen as a promise of heirs that her marriage should have brought. Her motto was ‘Humble and Loyal’. 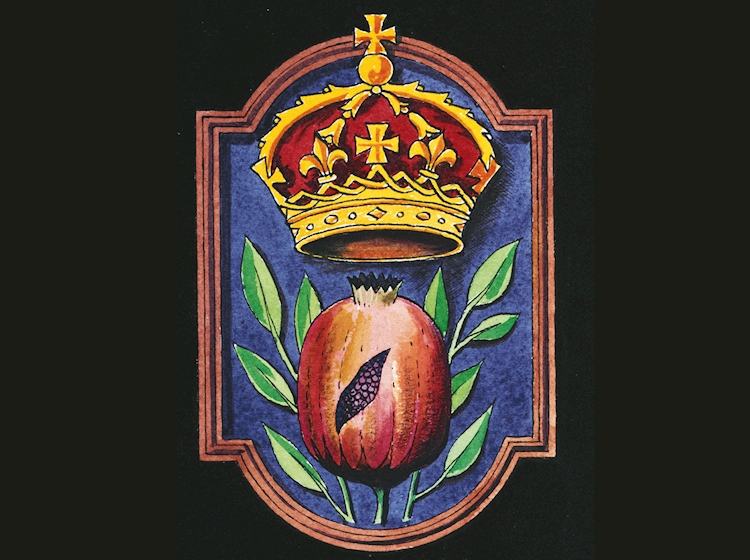 The controversial book ‘The Education of Christian Women’ by Juan Luis Vives, which advocated women’s right to an education, was dedicated to and commissioned by her in 1524, for the education of her daughter Mary. 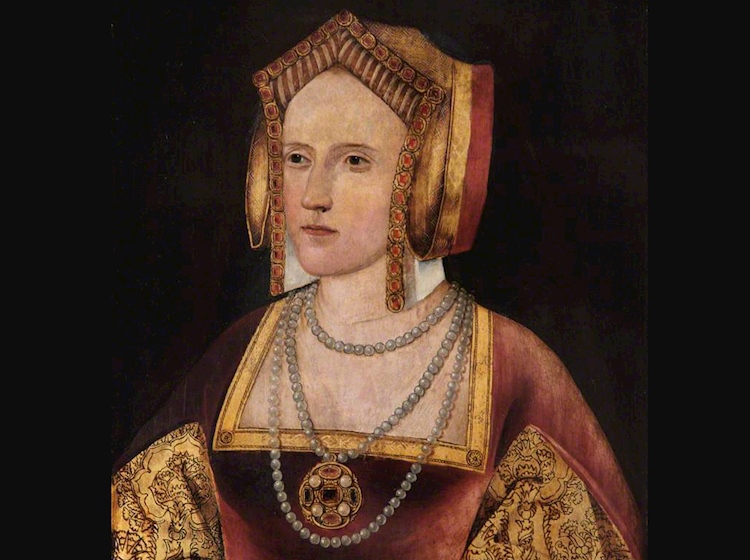 When Henry VIII became tired of Catherine and her inability to produce a male heir he asked the Pope to annul the marriage, claiming the earlier dispensation to be was invalid. Thomas Cranmer encouraged Henry to overrule the pope and so the links with Rome were severed as Henry declared himself Supreme Head of a new Church of England. Newly appointed Archbishop of Canterbury, Thomas Cranmer declared Henry and Catherine’s marriage null and void.

Catherine died at Kimbolton Castle in January 1536 and her tomb is situated in Peterborough Cathedral. On the day of Catherine’s funeral, Henry’s new Queen Anne Boleyn miscarried a baby boy.

Signature of ‘Katharine the Queen’ 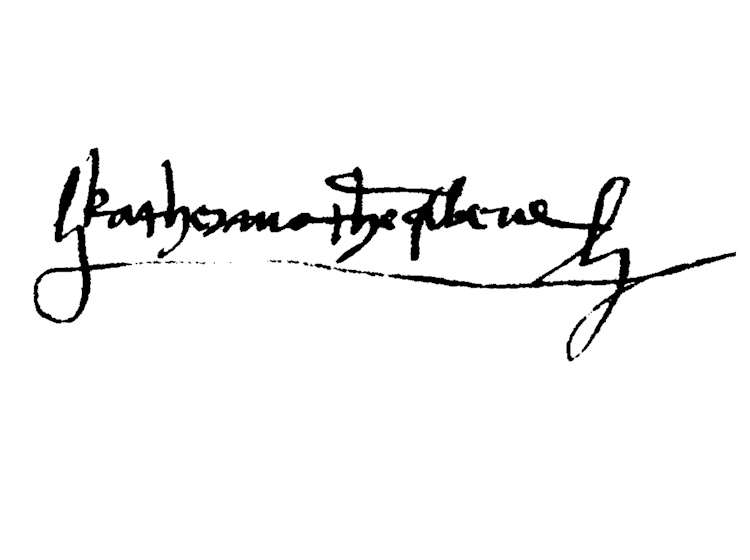