It’s thanks to Burma that George Orwell became a writer. Orwell, whose real name was Eric Blair, was inspired to switch careers after serving as a policeman in the town of Katha on the Irrawaddy River in the 1920s.

The Burmese say that George Orwell wrote three books about Burma – Burmese Days, a colonial novel set in the fictional Kyauktada (Katha); and Animal Farm and 1984 which both seem to predict the inconsistencies of the socialist regime that came to power in 1963.

The house where George Orwell is supposed to have lived in Katha. The building with the chimney is the kitchen

Nine was a magic number to General Ne Win, the dictator who seized power in 1963. On September 22 1987 the dictator, a strong believer in numerology, demonetised the existing currency and changed the notes to denominations of nine. Instead of ten, fifty and 100 kyat notes there were nine, 45 and 90 kyat notes. There was serious economic unrest which culminated in the 1988 uprising. A year later the currency returned to multiples of ten.

A famous fortune teller at the Shwedagon Pagoda

The national game is a form of keepie-uppie. Chinlon or caneball has been played in Burma for at least 1500 years. It is non-competitive, and involves about six players in a small circle passing the ball to and fro using their legs and body to prevent it touching the ground. Fast and skilled, it’s a game which resembles a cross between martial arts and dance.

The ancient game of chinlon played on a Rangoon side street

To attract the attention of a Burmese waiter you purse your lips and make a kissing sound, twice.

Tea is widely grown in Burma, particularly in Shan State. As well as being drunk it is eaten fermented and as the main constituent of Laphet thoke – tea leaf salad – topped with shredded carrot, ginger, chilli, peanuts and sesame.

Burma is the second largest producer of opium in the world. Much of it is grown in Kachin and Shan State, where it is smuggled across the border into China. It is widely used as a medicine in villages and smoked through a bamboo pipe. 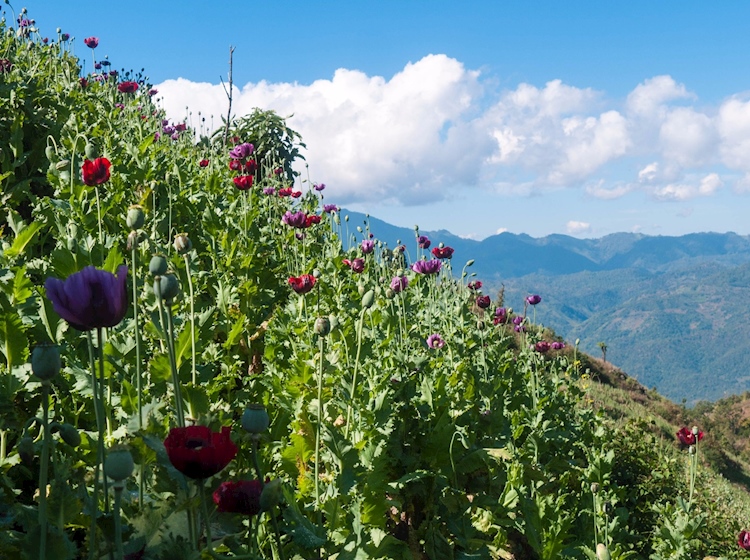 Opium poppies growing on the hillside of Shan State, Myanmar

There are many tribal peoples in Burma, all with their own languages. A survey in the late-colonial period identified more than 240 languages and dialects. The predominant language is Burmese spoken by the largest ethnic group the Bamar who make up 70% of the population.

The 37 nats are capricious spirits and demons which can make life difficult for those who fail to appease them. They are a unique part of Burmese life reflecting the animism that co-exists with Christianity and Buddhism alike.  On journeys over steep mountain roads, there are shrines where travellers make offerings to the nats to ensure safe passage.

Burmese drive on the right hand side of the road despite the fact that most vehicles also have the steering wheel on the right. Prior to 1970, cars were driven on the left but General Ne Win changed the side, supposedly on the advice of his astrologer.

Books by this author