Cumbria has only existed since 1974 when the counties of Cumberland and Westmorland were brought together under a local government act of 1972. Cumbria is the second largest county in England with an area of 6,768 sq km. Cumbria is exceptional in that there are three distinct types of terrain in the county. There is the flat marshy land of the Solway Plain, with the coastal towns of Barrow, Millom, Workington, Whitehaven, Maryport and Silloth.

Inland to the east there are the fells, valleys and lakes of the English Lake District with its three ‘English Munroes’ (mountains over 3000ft or 914.4m) of Skiddaw, Helvellyn and Scafell Pike. Further east of this mountainous area are the rolling hills of the Eden Valley, fine for dairy farming, winter grazing for the Lakeland sheep and building castles near rivers in Norman times.

1. Carlisle, the only city in Cumbria, once had a Ship Canal

This was not a narrow boat canal like the majority of canals in the UK. The Ship canal, officially opened in March 1823, was to be 11½ miles (18.4km) long, 54ft (16.5m) wide and 8ft 6in (2.6m) deep. It was to have a total of 8 locks, including the sea lock. Each lock was to be 18ft 3in (5.6m) wide and 78ft (24m) long. Seagoing sailing ships up to 110 tons were built in the city and although the canal had a relatively short life (closing in 1853 to be replaced by a railway) it enabled the modernisation of industry in the city by reducing the cost of coal by a factor of four.

2. A monument to the ‘Bishop of Barf’

As one travels north from Keswick on the A66, the steep slate scree slope of a small mountain called Barf is seen to the left with a large white painted rock standing near the top of the scree. This is the Bishop of Barf, a memorial to a foolish wager. In 1783 the newly appointed Bishop of Derry, now Londonderry, was in the area and stayed at the Swan hotel in Thornthwaite (now unfortunately closed). He wagered that he would ride his horse up the side of Barf and onwards to the summit of Lord’s Seat (the adjacent hill). Unfortunately, on attempting this feat, his horse fell on reaching the height of Bishop Rock, killing both horse and rider. To commemorate this rather foolhardy enterprise the rock was painted white by patrons of the Swan, who maintain the Bishop in his pristine white coat to this very day. Since the hotel closed local villagers have continued this tradition. The Bishop was laid to rest at the base of the mountain, now marked by the white painted rock known as the Bishop’s Clerk. The fee paid to patrons painting the rock was set at one shilling and a quart of ale.

From AD 794 Scotland suffered continuous attacks from the Vikings which extended down into England. By the early 10th century Britain was partitioned into Alba (Scotland) and England. Athelstan of England decided there should only be one ruler and invaded Alba, the start of a 700 year conflict between the two great powers. The Solway to the west of Carlisle became a regular crossing point for invading armies. Edward 1 of England was remorseless in his attacks on the Scots gaining the nom de plume ‘Hammer of the Scots’ over many years of battle. In 1307 he returned to the north intent on fording the Solway at the ‘Sul Wath’ (Wath is the old name for a Ford) at Burgh By Sands, five miles west of Carlisle. But it was not to be. While preparing for his latest campaign he spent five months at Lanercost Priory as he was in poor health with dysentery, but he did not improve. He made his way to Burgh by Sands where he rested further but to no avail. He died whilst his attendants were raising him to give him food. A monument to his memory was built by Henry Howard in 1685 which stands to this day on Burgh Marsh.

An easily accessible mountain Skiddaw, with its broad rounded summit, was an important beacon station in years gone by with two beacons to be maintained. It was Macaulay in the last century who wrote a patriotic poem which described how the news of the sighting of the Spanish Armada was passed from beacon to beacon until the whole country was warned. The last two lines read as follows:-

“Til Skiddaw saw the fire that burned on Gaunt’s embattled pile, And the red glare from Skiddaw roused the burghers of Carlisle.”

Now research indicates that ‘Gaunt’s embattled pile’ is the hill in the middle of Lancaster. It is most unlikely that a beacon in Lancaster could have been seen from Skiddaw and much more likely that the message followed the coast from Lancaster to Beacon Hill, Barrow then on to Workington by Black Combe, Muncaster, Boothill and St Bees Head. The glow from Workington across the Solway Plain would be the signal to put the torch to Skiddaw’s two beacons.

The Borrowdale Sop is a small cloud that rises at times at the Head of Borrowdale, near Piers Ghyll. Gradually growing larger it floats away down the Derwent valley over Styhead Tarn. If it goes over towards the Vale of St John the weather will continue to be fine, but if it takes the direction of Langdale, rain will follow within the next twenty four hours.

Allonby is a coastal village which still retains much of its original character. Allonby has a long sandy beach, with fine views across the Solway Estuary to the mountains of Southern Scotland. There was great excitement in the village in 1903 when the barque ‘Hougoumont’ ran aground there. No lives were lost but part of the ship’s cargo was scattered all over the shore. The villagers mounted a ‘salvage operation’. The crates contained tins of salmon, peaches and pears but were unlabelled. The only way to tell which was which was by shaking them; if the contents moved, it was fruit. A good time, and a few good meals, were had by all. This was at a time when there was much poverty in the area. Echoes of ‘Whisky Galore’?

7. The Parting stone and William Wordsworth

The inscribed stone which stands just off the path, a short distance east of Grisedale Tarn (above Grasmere) marks the spot where William bade goodbye to his brother John for the last time. Unfortunately, shortly after this last parting, John was to perish in the loss of his ship, the East Indiaman, the Earl of Abergavenny. On Friday night, 5 February 1805, the ship was wrecked on The Shambles, off the Portland Bill, through the incompetency of the pilot. Wordsworth records this sad happening in a poem of lament, composed at the parting stone. There follows a short excerpt:

“The sheep boy whistled loud and lo! That instant, startled by the shock, the buzzard mounted from the rock - Deliberate and slow: Lord of the air, he took his flight:

Oh! Could he on that woeful night - Have lent his wing, my brother dear, For one poor moment’s space to thee - And all that struggled with the sea - When safety was so near.

Here we did stop and here look round, While each into his self descends,

For that last thought of parting friends - That is not to be found….”

8. Long Meg and her daughters

East of Penrith near Little Salkeld, are Long Meg and her Daughters,a Bronze Age stone circle, the sixth biggest example known from this part of north-western Europe.Maybe we are lucky that they are still there as Lieutenant Colonel Samuel Lacy of nearby Salkeld Hall was once infamous for attempting to blow up the stones with gunpowder. However, commencement of the work coincided with a violent thunderstorm, which was interpreted by the workers as a supernatural warning and they refused to continue the work, thereafter Colonel Lacy had a change of heart.

However Colonel Lacy is responsible for a more modern visitor attraction. Lacy’s caves are man-made caves, originally created as a decorative folly in the 1800s. They consist of five chambers carved out of the sandstone rocks directly above the River Eden at Glassonby, to the north of Little Salkeld.

The visitor walking the remote track past Wythop Hall towards Beck Wythop may wonder at the signs of past industrial activity presented by the remains of the old silica brick works. This was an ill-fated venture to produce fire bricks from the local quartz rock. A share prospectus to raise £120,000 was floated in 1932 and the building of the works provided work for 50 men over a two year period. The plant included kilns, a very tall chimney and a crusher were duly completed with an overhead cableway being commenced to link the crusher with the quarry. Meanwhile the kilns were fired up and about 50 tons of bricks produced in the first few days. Alas that was all that was ever produced! On the next firing the kilns were somehow overheated and they all collapsed. This was rather fortunate for the instigators of the venture as it turned out there were no workable reserves of quartz in the area. No local money was involved. People the author has spoken with locally maintain that everyone, including the directors, knew the venture was not viable and that it was an example of a swindle known as ‘share puffing’. The works have since been pulled down and all that remains are the foundations of the plant and, in the forest, the plinths for the proposed cableway.

10. Origins of the quartz cross on the summit plateau of Blencathra

There are two crosses of white quartz rock set into the ground on the summit plateau between Blencathra and Atkinson Pike. The larger of these was built as a labour of love over many years by Harold Robinson of Threlkeld. Harold, who died in 1988 aged 80, climbed Blencathra sometimes twice a day, each time carrying a stone for the cross. The stone came from the lead mine at Threlkeld where the Robinson’s worked. It was built in memory of Mr Straughan, a great friend of Harold’s, who was killed in active service in 1942. In civilian life Mr Straughan was the gamekeeper at Skiddaw House. Harold was a dedicated walker and fell runner. According to his brother, Sid, he preferred walking to using public transport. He regularly walked to Maryport and back, some 40miles. The second smaller cross was built later by persons unknown using stones robbed from the larger cross. 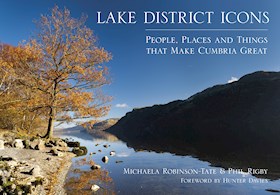 Voices of the Lake District

The Guide to Mysterious Lake District

The Lune Valley and the Howgill Fells