Edward Thache (aka ‘Blackbeard’) met his fate on 22 November 1718 and was thus immortalised as a pirate legend. We take a look at some little known facts about this infamous highwayman of the seas.

Blackbeard’s real name was Edward Thache and was likely to have been born in Bristol sometime around 1680.

Blackbeard’s father - Edward Thache Senior – was born in Stonehouse, Gloucestershire on June 14 1659, and was baptised two weeks later at St Cyr’s Church, which is next door to a large manor house which is now Stonehouse Court Hotel. Blackbeard’s grandfather, the Rev Thomas Thache, was the rector at the church before eventually moving to nearby Sapperton, Gloucestershire where most of the family is buried.

Edward Thache Senior was a mariner and moved to Bristol after his marriage with his first two children Edward ‘Blackbeard’ and Elizabeth. He later remarried after the death of his first wife and had a further 3 children.

Bristol at the time was a major port for slave merchants. Although no slaves en-masse were transported into Bristol (the slave markets were in the Americas and Caribbean), the goods made in exchange for slaves were loaded onto ships here and goods such as tobacco and sugar were unloaded from the West Indies. Bristol was a hub of activity as it was one of the ports that operated under the Royal Africa Company (RAC)’s monopoly of slave trading.

Records show the Thache family with a young Blackbeard moved to Spanish Town in Jamaica around 1695. The family owned a plantation and slaves which were deeded to Blackbeard in 1706. Sometime between 1706 and 1713, Edward Thache Junior went from being a sailor in the Royal Navy aboard HMS Windsor to becoming a pirate.

Blackbeard had a fearsome reputation but multiple witness accounts never report any violence from him until his last, fatal battle. His reputation clearly preceded him! However, his crew were another matter…

Blackbeard freed a lot of slaves during his piracy career but he was no abolitionist. A number of ships he captured were slave ships, which tended to be larger to account for maximum ‘cargo’. Upon capture, a large proportion of slaves joined the pirates – clearly the better choice rather than life on a plantation. However, reports also account that Blackbeard and his associates also returned slaves to the mainland to be sold at auction. Even up to his death, Blackbeard’s crew were made up of both free men and former slaves.

His famous pirate ship was originally a British-turned-French vessel called La Concorde. When Blackbeard captured the ship a year before his death, most of its defences (such as cannons) had been stripped away to make room for more slaves. It was easily out manoeuvred due to its size and load on the open water and the crew promptly surrendered the ship when the pirates caught up with them. Blackbeard and his crew refitted her and renamed her Queen Anne’s Revenge. In 2011 the State of North Carolina declared they had found the wreck just off the coast near the Beaufort inlet.

Blackbeard married a local girl when he settled for a time before his death in North Carolina. They had a daughter called Elizabeth who later died young with no issue.

Blackbeard met his fate during a battle with Lieutenant Maynard at Ocracoke. At one point, Blackbeard’s crew had seemingly ‘won’ after killing a few men aboard the other sloop. However, when he went to board Maynard’s vessel he was ambushed by a group of hidden sailors (including Maynard himself) in sword-to-sword combat. Blackbeard was killed and was noted to have received five shots and 20 deep cuts. His body was thrown overboard but not before his head was severed and strung from the bow of the ship. 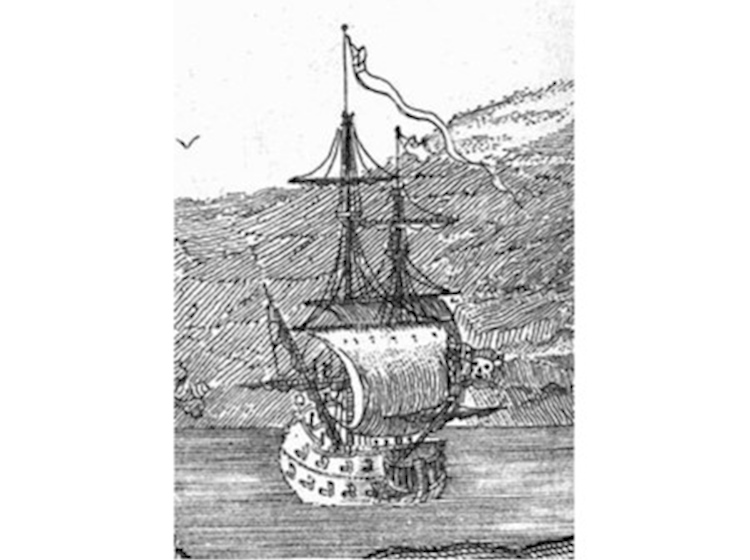